For better or worse, I’ve become the de facto go-to guy on Scottish golf among my circle of friends; consequently, if one of them is thinking about a trip across the pond, I’ll get questions about where to stay and eat, and, of course, what courses to play. The latter can be a little tricky, for much like wines, food, music, and romantic partners, golf courses are a matter of taste.

Consider the Kingdom of Fife, for example, which is the area that is bordered to its south by the Firth of Forth, to its east by the North Sea, and to its north by the River Tay.  The crown jewel of the Kingdom, of course, is the Old Course at St Andrews, which rightfully belongs on every golfer’s bucket list.  In addition to the Old Course, there are 6 other courses associated with what’s called the St Andrews Links Trust, several of which are quite good.  Within a 45 minute drive of St Andrews are probably a half-dozen or more seaside links courses worthy of attention, including the diabolical Carnoustie, which is definitely in the conversation regarding the hardest golf courses at which I’ve teed it up.

I’m not sure I can write much about the Auld Grey Toon that hasn’t been already said, except that in addition to being the official Home of Golf, St Andrews also is home to the third oldest University in the world, and centuries ago was an unfortunate battle ground of the Protestant Reformation.There’s a museum commemorating this period nearby the University, and is really a must-see when you’re in town.

Above all, St Andrews is a marvelous walking town, with plenty of shops, galleries, and, oh yes, pubs. The Dunvegan (which used to be a wedge shot for me away from the Old Course’s first tee; now it’s more like a knock-down 8-iron) and One Golf Place (even closer) are popular stops after a round, as is The Jigger Inn, which sits by the Old Course Hotel along the RoadHole (#17). On the somewhat rare perfect day, it’s great fun to sit outside, enjoy lunch and a pint while watching the Great Unwashed mangle the Official Hardest Par-4 in the World.

(For those of you not familiar with the Road Hole – you hit a blind tee shot over a hotel sign to a narrow fairway with high fescue on the left and a hotel on the right.  Even after a good drive, you’re left with anywhere from 180 to 200 yards into a green that is skinnier than Cameron Diaz and not nearly as easy to navigate. A hideously deep bunker borders the left side of the green; on the right is the infamous Road, of which one must play off if he hits it there. I once played with someone who somehow managed to hit the hotel sign, the Road, and that bunker and still walk away with an 8.)

If you venture outside of town, there are options that range from the quirky (the links at Elie, where the starter will send you off the first tee only after peering through a periscope to make sure the group in front of you has cleared) to the ultra-modern (Kingsbarns, built the 2000, is perfectly conditioned, has great sight lines, views of the North Sea, a huge clubhouse, a hefty price tag, and, despite all this, leaves this golf nerd cold).  But if I were to choose one course to play in Fife outside of St Andrews, it would be the Balcomie Links at Crail.

It’s interesting how we perceive golf courses. Upon first examination of the scorecard, a “serious” (quotes intentional) golfer might scoff at Crail’s short yardage (about 5,800 yards) and its par of 69. Be aware that par is a very honest score. There are 6 good-to-outstanding par-3’s, two of which are over 200 yards, including the monstrous 13th, a 220-yard uphill beast that typically plays into the wind, and the drop-dead gorgeous 14th,which ranks with the 11th at The Old Course as my favorite in Scotland. The 5th, aptly named “Hell’s Hole,” is a 450 yard Cape-style dogleg right that dares you to cut off a section of the North Sea (Hint: Don’t).  My criteria for a memorable golf course is one that doesn’t beat you up, but has you scratching your head over why you didn’t score better. Crail has those qualities in spades.

But what makes Crail special is its setting. Golf has been played there since the 1700’s (The Crail Golfing Society was established in 1785, making it the 7th oldest such organization in the world), and Old Tom Morris laid out the current track in 1895. I’m sure not a spec of dirt has been moved there since then. When you look out from the first tee, which sits on a high crest, the confluence of land and sea is almost overwhelming in every sense. I’m not a religious person by any means, but I do believe that this piece of land was put to its desired use by whatever Deity or Natural Order one cares about.

And if you’re fortunate enough to have Bill Brown or Andy Carr carry your bag, either one of them will guide you expertly around the course while reciting its history, and will join you in a wonderfully situated clubhouse after the round.  And while enjoying a first-rate pilsner, you might contemplate Michael Murphy’s tome,“Golf in the Kingdom,” in which the author spins a fanciful yarn of playing a round of golf at “Burningbush,” and meeting up with a golfing guru named Shivas Irons, who, along with his yogi, Seamus MacDuff, teach Murphy the values of patience and self-awareness that can unlock the human potential.  I mention this because “Burningbush” is actually a very thinly disguised version of Crail, including the aforementioned 13th, where Murphy and Shivas, after several drams of whisky, decide to go play the hole in the dead of night in the midst of a howling wind.

To find out what happens, you need to read the book. Or better yet, just go play Crail. 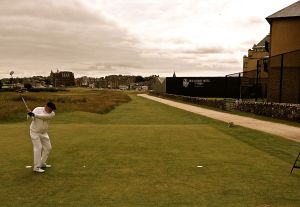 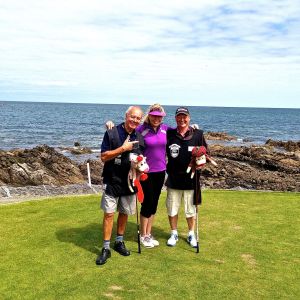 1 thought on “The Kingdom”

In Case You Missed It